Humans are visual creatures. It’s debatable which of our five fundamental senses is the most important one, however, I’d say being able to process the light coming into our eyes helps us understand and interact with the environment to a greater degree than the other perceptional functions. Language started as a sound system (hearing) but it was quickly translated into a much needed visual form. The latter has since been molded into various styles, emoji being the particular one I’d like to discuss in this post. Come with me.

Online communication, with instant messaging apps and social media acting as the main culprits, have given rise to new modes of expressing yourself. Chatting over the Internet is all about quickness and having fun.

How do you achieve these goals?

Well, looking back, it seems like the rise of some sort of a pictorial language was bound to happen. A single emoji is capable of conveying a complex meaning or emotion rooted in the context of a particular conversation.

Or have we simply come full-circle, since ancient Egyptians were pretty much using emoji already? 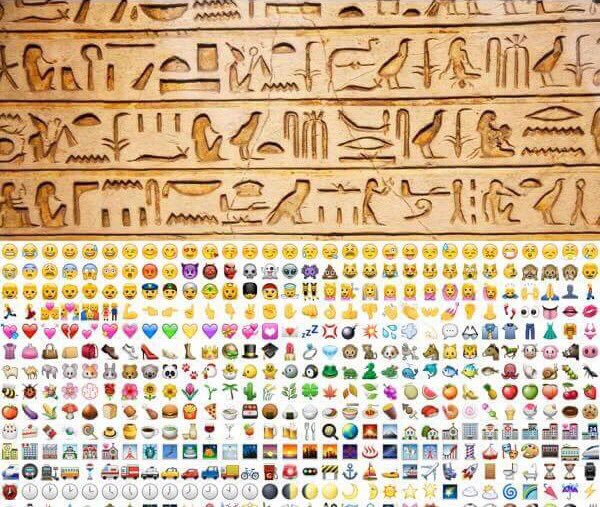 Where do emoji come from?

All jokes aside, emoji actually originated in modern Japan in 1999. It’s worth noting that they are actual, graphic representation of their predecessors – emoticons – that is, stuff like 😎 but they have since added a ton of images which it was impossible to represent using only punctuation marks, numbers and letters.

2010 saw the incorporation of emoji into Unicode, which allowed for their standardization and use outside of Japan. The original set was also greatly expanded.

Their popularity has been growing ever since, so they clearly must be helpful somehow, right? The trouble with online communication though is that it’s missing body language and other physical cues present in real conversations.

That’s where emoji come in

to fill the gap.

Emoji’s original purpose was to convey the tone of conversation, however, they’ve evolved into something much bigger. Besides being used as emotion markers, or graphic hashtags summarizing or emphasizing the utterance, they can also take up culture-specific meanings.

For the purpose of this post, I’ll focus on Western / English-speaking online communities, as that’s what I’m most familiar with. With the variety of human cultures out there, I’m sure I’m only scratching the surface with these examples.

Nevertheless, here’s a selection of emoji with their arbitrary meaning explained:

– this one denotes careless fabulousness, shutting haters down, or even sense of accomplishment

– an expression of utmost regard for something, usually used multiple times in a single comment

– meaning absolutely, for sure

These are just some of the most popular ones, but there’s plenty more that fit many common online contexts.

Emoji certainly enhance the meaning but is their absence taking anything away? Do we understand each other just as well without them? How many times were you unable to interpret a sentence because it was missing an emoji conveying the tone?

On the other hand, how often do you express yourself solely in emoji? Posting a reply consisting of a single or a string of very relevant emoji is similar to a witty statement. It seems like communication involving these miniature images can be challenging and fun at the same time.

So, where does it all lead us? What are the new frontiers involving emoji? How big and popular can these little rascals still get?

Well, I think it’s safe to say they’ve already grown way beyond anything anyone expected them to be. I guess you could call them overachievers, and here’s why:

Emojli – although the project was terminated in 2015 and eventually labeled as a joke, the idea of a social network consisting only of emoji is very intriguing.

emoji. See how it works below.

Emojicon – yup, you might want to hit it up if you’re in the NYC area.

2015 word of the year by Oxford Dictionaries

A musical and a film

Emoji are proof that a picture is worth a thousand words. They also may be one of the reasons that texting as a means of communication is still holding strong and growing. Circling back to the question posed in the post title, I say emoji are helpful.

They aren’t perfect and may cause misunderstandings across cultures and sometimes be overused, including non strictly communicational contexts, but overall they add an interesting, emotionally-imbued layer to our text exchanges.

Emoji provide a creative outlet and make online conversation more fun. On top of that, it’s fascinating seeing how they penetrate pop culture and our daily lives.

Let me know what’s your stance on emoji. Do you like and use them? Or do you consider them childish? Do you reckon there are contexts they shouldn’t be used in? Hit me up in the comments down below or on Twitter @Chatwee