My presence in the online socialverse has lead me to believe that some people could use a couple of hints to step their hashtag game up. And I don’t mean this in a patronizing way. I’m just trying to extend a helping hand to my fellow social media users. If you’re thinking ‘huh, what does this guy know that I don’t already?’, well, a couple of things, actually, that I didn’t think of before doing research on the topic. So, no matter how much of a hashassin you consider yourself to be, I still reckon that reading this post will not be a waste of your time. Get ready for Part 1 of how to best use hashtags on social media. And Part 2, once you’re done here.

I believe that by now, you’d have a hard time finding someone, who doesn’t know what hashtags are among people spending time online on a regular basis. Just to make sure I have everyone on the same page, though, I’m talking about words used mostly in social media, but not only, as I will discuss in Part 2, preceded by the pound sign ‘#’.

Alright, but where did they come from? Well, it is Chris Messina, formerly of Google, who’s widely recognized as the inventor of hashtags (click to enlarge). 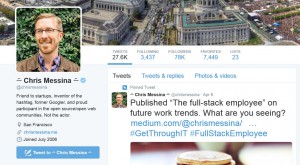 What are hashtags for, anyway?

A hashtag is like a keyword, that structures the informational clutter and noise so prevalent in social media. Pretty much all the social networks, from Facebook to Vine, now support hashtags, although I’ll focus on three of them for the purpose of this post. Hashtags are clickable and work like links, redirecting you to pages that collect content on a given topic.

What’s so cool about them is that they’re very good at conveying sarcasm or irony, expressing emotion or mood, answering a question posed in the picture caption or even contradict the content altogether. Hashtags can be used for a variety of purposes, such as amusement, provocation, delivering extra information, creating mystery.

They’ve turned into a new and powerful language tool, which is a bit like a punctuation mark, but perhaps stronger, as they often hold deeper meanings. Hashtags help you pack a punch and convey condensed meaning. All this while you’re facing character limit, short attention spans and the generally dynamic environment of the social media world.

From the business perspective, they also help you create brand exposure and reach your target audience.

So, what are the best practices for using hashtags? Let me go ahead and cover three of the social media platforms that are nearest and dearest to my heart, by providing you with some essentials, as well as occasionally straying away from the core topic to share my views on social media in general, as a chronic user. As you read on and ideas pop into your head, remember to let me know what you think in the comments or @Chatwee

Let’s start with the birthplace of hashtag, the place where things happen before they’re news.

Twitter hashtag system doesn’t support special characters like +, !, $, %, -, ^, &, *, etc. You can only use letters, numbers and the underscore ‘_’ (no, that’s not a sad face emoji). Basically, there’s no hashtag length or number restriction, as long as it stays within the general 140 character tweet limit. However, this may change, as Twitter may go beyond its character limit in the near future.

Apart from all the silly things you can use hashtags for, described early in the post, you can also use them to elevate your company in a number of ways.

First of all, they increase engagement. Here’s a bunch of fresh stats you can refer to. In a nutshell, using them moderately will generate retweets, favorites and obviously exposure.

Next, you can use them to run Twitter chats, where people are encouraged to ask questions using a unique hashtag, say, #AskACME (or you can host a live Q&A directly on your site using easy to install group chat widget).

Another interesting application for hashtags is found during various festivals or conferences, where people present on the spot can interact and even possibly meet in person by attaching an official hashtag to tweets they send. Say, you’re going to South by Southwest next year on your own (not very probable, I know, but let’s assume you’re from a small town in Delaware), and you want to see if there’s anyone out there from your area.

You can then tweet something like: Anyone from #Delaware at #SXSW2016 wanna grab a beer? to see if you’re lucky. You get the gist.

Essentially, a unique hashtag creates a separate channel of communication for people interested in a particular event or topic. You don’t even have to be there in person to easily see what’s going on. Hashtags can become a sort of a tagline for the event and contain stuff like brand or company name for extra exposure in the user social networks.

There are also things like trending topics and different methods of browsing hashtags, but let me get to that in Part 2.

Honestly, this might be my favorite social media platform at the moment. I feel like I’m still hip enough to follow certain trends, but too old for the teenage epidemic of Snapchat, although many of my peers use it anyway.

Instagram provides a neat platform for visual communication, artistic expression and actual verbal interaction with people. I like it a lot because you can tell so much through a single picture. Some may say I’m going too far, but I think it’s the modern day way to express yourself with well-crafted shots. Kind of like painters did, when digital tech was still non existent. They have been capturing the real world on canvas and it required skill. Now it’s easy to produce an art piece as such, but you still need to have an eye for a good shot, a creative idea, and so on.

No, I’m not paid to promote Instagram. Although I should be, right?

Now, the thing you have to remember, especially if you’re trying to increase your brand’s reach, is that you can only add up to 30 hashtags to a picture. Many people consider this to be spamming, but personally, I don’t mind it.

Regardless of what your stance on hashtag stuffing is, Instagram now shows only three rows of text under pictures, and the rest is available after clicking for more, so the 30 tags are easier on some of the more sensitive eyes (click to enlarge).

What’s cool about Instagram, is that you can also edit the tags – add or remove them later on, if you come up with some genius ideas, plus add tags in the comments.

In my personal experience, using a significant number of appropriate hashtags (certain hashtags have developed around communities, like, for example, #foodporn or #kicksoftheday) is the best way to connect with similar people, reach out to prospects and build your following. Oh, and don’t act too Hollywood, follow some people back, man. I believe that hashtagging your pics to the limit is a valid promo strategy for new brands and companies.

The thing about people on Instagram is that they’re mostly very curious about what other like-minded people are doing, wearing etc. I browse tags I’m interested in all the time and if you’re worried about your mobile data transfer, you can now also do it on desktop. Using proper hashtags pretty much GUARANTEES to get you likes and possibly follows, if the rest of your content is good enough.

Also, location-based hashtags are great. For instance, I’m posting pics of my city, and keep getting likes from various local business that don’t necessarily like my pics per se, but rather want to boost their exposure, and that’s fine by me. Some of them I become interested in, others, I don’t care about. The point is, that such hashtags create an opportunity to connect with people, or even other companies, locally, and if something interesting happens to be located within walking or short driving distance, there’s a big chance a transaction will occur.

Hashtags on Facebook are a rather recent feature in comparison to other social media platforms, they were introduced in mid 2013. There are no deviations here in terms of characters that are supported.

What’s different, is the platform’s more business-like approach to hashtag search, where you’re likely to end up with a list of Facebook pages, instead of being provided with results showing posts containing the tag you searched for. You can simply type in a hashtag into the Facebook search bar, or modify the URL up top to make it look like this:

You can also click on any hashtag you see to get posts containing it, with your friends likely to appear at the top of search results. The ranking algorithm is very complicated and is a mixture of many factors.

Both, professional sources and my personal experience indicate, that hashtag use on Facebook isn’t something to be treated very seriously. I mean, it doesn’t work the same way as on Instagram, for example, where you get clear, chronological results related to the keyword you searched for. A lot of people frown upon hashtags being used on this traditionally hashtag-free platform, so use them sparingly and at your own discretion, depending on who your audience is (younger generation may appreciate comedic effect, if done correctly).

Personally, I say hashtags on Facebook aren’t worth the trouble. You may end up looking desperate and out of place. 1-2 of them is an absolute maximum if you really feel like tagging. Bare in mind, that not only the algorithm returns results that may not match the query well, but also users generally don’t care about them.

A better strategy for boosting exposure might be name tagging, using the ‘@’ sign followed by a person’s or another page’s name. If people included in such a post have liberal privacy settings, the post will appear on their walls and will be displayed to their Facebook friends as well. This is a creative way to increase your reach, but obviously has to be used sparingly, as to not seem spammy or annoying.

Alright, we’ve reached the end of how to best use hashtags on social media. You now know the technical facets of hashtags and what they’re for. From the business standpoint, I’d like you to remember three things:

If you’re a small or medium business, don’t yet have much conversation going in your social channels and are trying to create more buzz around your brand – use hashtags!

Do it often, but make them relevant to the content. Research the hashtags that already circulate in your sector. For Twitter, 2-3 will do. Make them a summary of what the tweet is about. For Instagram, I say max out. For Facebook, it’s not really a thing there. There may be certain communities or industries that connect using hashtags on Facebook, but I’m not aware of them. Let me know if you’re familiar with any such instances.

Now head over to Part 2 for some extra personal insights, finer points, and a collection of tools you might find useful when it comes to hashtagging.