Who’s not on social media these days? No, really? My guess would be the very young, the very old, and those living in remote areas, where access to the Internet is limited. But even these boundaries are being pushed ever more often. People from all cultures and walks of life join social sites to boost their egos, network, in search of social acceptance, or to vent creatively. This new type of creativity is something that particularly draws me to social media. Personally, I’m moving across a number of platforms on a daily basis, however, I’ve found that it’s Twitter, that offers the most in terms of pure, unique content.

The cultural clash that takes place on social networks is an excellent catalyst for creation of new, never before seen forms of content. The online socialverse has become a melting pot, populated by millions of creative netizens, contributing to one common Internet culture, while retaining their original, distinct flavor, blazing new trails in humming servers.

For the most part, social media platforms offer a combination of text, pictures and videos, when it comes to content published by their users. So, what makes Twitter stand out? Well, a number of things, actually.

Twitter extracts and mixes the best out of the other most popular platforms and puts it all in a nutshell. Twitter is dynamic, direct, as real-time as it gets and has the 140-character limit, which forces you to bring your writing A-game out, when composing a tweet. I’ll even go as far as to say that this limitation has created a new, extremely concise online literary genre, especially when you consider emojis as pictures accompanying and magnifying stories that are being told.

With the amount of data we produce daily, the Internet is a worldwide contest for attention. Only the most useful, unique and freshest pieces of content stand a chance of being read and, ideally, shared. Twitter makes the latter extremely easy, and has even improved the option to comment upon the RTs you make. Now, it’s up to what you have to say to your followers…

A closer look at what Twitter has to offer

With over 300 million active users a month, the microblogging platform is a real content creating behemoth. You can find anything on Twitter, from politics and pop-culture, to niche hobbies and far beyond that.

In this article, I’d like to convince you about Twitter’s superiority by presenting nine accounts I follow personally, that deliver original content, the type I haven’t seen published on other platforms. I hope you’ll enjoy the list and possibly follow some of the accounts yourself, as they cover a variety of interests and topics.

Disclaimer: I appreciate the fact that people’s senses of humor differ. What I may find funny doesn’t have to make you laugh and that’s perfectly fine by me.

Bill Nye The Science Guy? Yeah, more like his evil twin. @yaboybillnye offers what you could call life advice mixed with scientific ‘facts’ (some of them might actually be true, though), written in slang-heavy language, often referencing pop-culture. 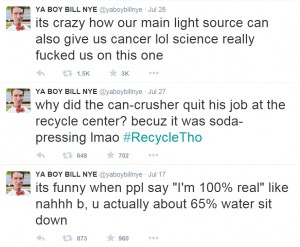 Anyone who’s into sports knows how much trouble player injuries cause. @NBAInjuryR3port takes up a lot less serious approach to the topic by tweeting fictitious information on injuries. Most of it is absurdly funny, very creative and sometimes related to the player’s actual personal characteristics. 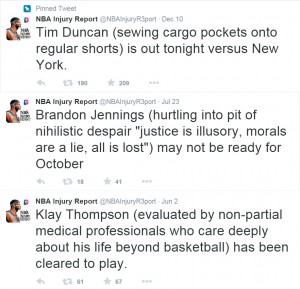 Bio: Doing a science on the red planet. Not the real @MarsCuriosity. Tweets relayed by @jfiliatrault.

Curiosity, the Nasa-sent rover exploring the Red Planet is doing plenty of good work and obviously has its own account (see: bio). Now, imagine we’ve already developed AI and equipped the rover with it! What we’d get probably wouldn’t fall far from @SarcasticRover 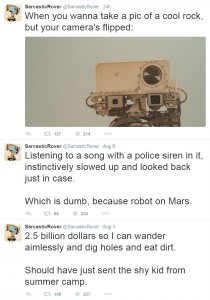 A highly entertaining account that offers you ridiculous bets, which I’ve found myself discussing with friends in real life a couple of times. It’s a shame, though, it doesn’t actually pay the money because I’d be up for some of them! 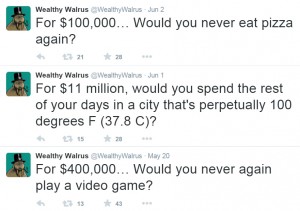 Bio: Officially, I have nothing to do with arby’s. Unofficially, everything is nothing. nihilistarbys@gmail.com

The name says it all. One of the most bizarre accounts on the list, definitely not for the easily depressed. To me, it’s funny and original. I don’t mind the shock value it brings to my timeline and so do almost 100,000 other people. 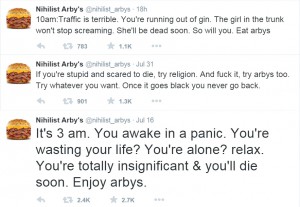 Another bizarre, yet original and quite realistic account. An angry and always disappointed boss, you might have come across in your career if you’ve worked in certain industries. 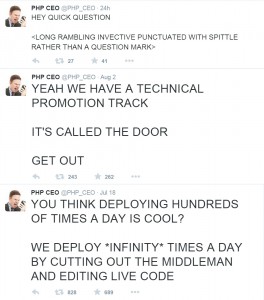 Bio: We loving coat’s #bigtime! NOT affiliated in ANY way with THE Burlington Coat Factory

Here’s another brand parody account. The things about it you’ll notice right away are the broken English, the prevalent use of the #coats hashtag and the overall absurdity of some of the tweets. Not very compelling content per se, but rather a freak of an account. 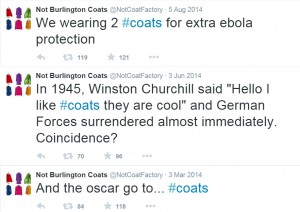 I have to admit, initially I got duped into thinking this is the real deal. After a number of tweets, though, whose level of absurdity exceeded all known scales, I understood this is all for laughs. A comedic take on one of the most grotesque and tragic countries in the world. 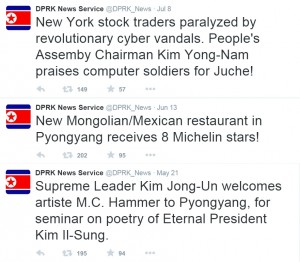 To wrap the list up, here’s another sports-related account. In 2012-13, Washington Wizards of the NBA had an awful start to the season and won only 29 out of 82 games total. Must have been a fed up fan who set the account up. Can’t blame him, most of the tweets looked like this:

It’s not only the entertainment value, that makes Twitter the best social media platform you can register at. First and foremost, it’s an excellent source of the latest news you receive first-hand directly to your smartphone.

Among some of the advantages of being on Twitter are:

To sum things up, I reckon Twitter to be the best social media platform because it offers an unparalleled variety of content, utilizing text, pictures and videos. Another cool thing about it is that you can directly reach out to people without even following them (except, maybe, private accounts, which there aren’t that many of anyway). Personally, I’ve had the chance to exchange comments with semi-celebrities that I otherwise wouldn’t be able to ever talk to.

So, Twitter’s strongest pros are the sheer entertainment value, and directness and speed of communication. If I were to talk about cons, I’d say I’m sometimes annoyed by blatant advertising some of the accounts, including those mentioned above, get involved in. But hey, I’m not trying to rain on their parade, I know it’s a part of the biz. Just keep unique content coming my way and I’m good.