The content you’re about to read isn’t exactly what I had in mind initially. And I don’t mean that in a bad way. Being quite familiar with the concept of online influencers and observing a number of them on a daily basis, I’ve had rather a set notion of what they’re about. Then, I came across an intriguing article and decided to switch things up a little bit. As the pieces started to fall into place, I thought I might as well tell you the whole story of how I settled the score between online influencers and brand advocates.

It’s a whole new world out there on the Web. Do you remember the first time people started to get famous and create following based on their online presence? Me neither. Well, the fact is that there’s a huge number of online influencers of all kinds and lifespans, and it doesn’t seem like this trend is going to disappear anytime soon. Not will all the opportunities it provides for satisfying human need to get attention, observe others’ lives, as well as for doing business.

Jay Baer wrote an article, arguing that online influencers are overrated and don’t bring the same kind of results brand advocates do. His main point could be summarized in these words: online influencers have audience but aren’t automatically influential. They create awareness, however, rarely shape consumer behavior and drive action.

Baer then points out the difference between having an audience, which he considers to be mere numbers and the level of advocacy an online influencer displays, often depending on their genuine passion for the product, knowledge of the category, whether they’ve been compensated and other factors.

Now, before I’ll let you in on my perspective, I’d like you to take a look at this infographic, directly related to Jay’s article. It’s rather lengthy so I don’t want to distort the coherency of this post by pasting it into the content. However, do take a look at it, as I’ll be referring to the infographic in the latter part of the post.

The article that’s become an inspiration for this modest post is really well-written and contains rock-solid arguments. It’s not that I don’t agree with it but I think some key points might have been missed.

I’ll not attempt to refute Jay’s post. Not at all. I’ll try to, however, expand on his ideas on the basis of my own experience to show online influencers are not necessarily less effective than brand advocates and also tell you a little story.

Ok, let’s go back to Baer’s main point which was that online influencers’ outreach creates mostly social media chatter and doesn’t drive much sales. It makes people aware of the product but doesn’t convince them to buy.

Although he’s right in saying that having an audience is not equal to being influential, I haven’t seen any stats regarding online celebs having little impact on sales. This may be difficult to measure but still. Besides, I believe that purchase decision starts with raising awareness of the product among prospects and this is exactly what online influencers are doing.

Information is wealth, the way it’s presented, in a clear and complete manner, by a professional online influencer surely holds a lot of weight in comparison to a fervent but perhaps not very coherent client-turned-brand advocate. When you’re trying to make a purchase decision, do you prefer a well-structured and informative message from someone you respect or an enthusiastic praise from a stranger?

The chatter (awareness) created by online influencers (as much as by brand advocates, whose actions are in no way GUARANTEEING to boost sales) is what may turn into the desired advocacy, when people actually yield to the original message which is trying to spur their action.

This brings me to another important point, which seemed to be completely omitted in Baer’s article, and that is personality. Alright, I admit I would probably be more likely to listen to a family member’s or friend’s recommendation than that of an online celeb I don’t know much about.

There are two problems with that statement, though. First, most of product-related praise you’ll come across in your life will originate with strangers, of whose tastes and preferences you know little to nothing about. Second, online influencers will often match their audience in terms of things they like a lot more than brand advocates.

I’m talking about treating the online celebrity a little like a platonic friend, who doesn’t reciprocate your friendship because you don’t know each other personally, but who you’ve been following on social media because you love the same things and you trust their opinions.

Let me just quickly comment upon online audience and it’s numbers too, while I’m at it. I think what Jay underestimates is the fact the the audience online influencers have is usually a large one and definitely of high quality. I mean, you don’t follow someone on social media if you’re not interested in what they have to say. Again, any product reviews and such by online influencers create awareness and not necessarily action but like I said, this is the first step in making a purchase.

Remember, I promised you a little story?

So after reading the article, I went on to follow Jay on Twitter. He had this tweet pinned at the top of his timeline, with a video of him discussing two of the latest live streaming mobile apps: Periscope and Meerkat. 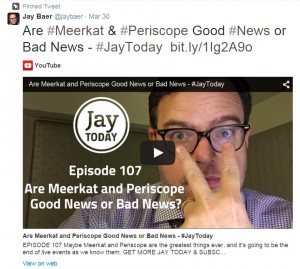 I saw the names of the apps pop up a couple of times recently, so I decided to watch the video. It turned out to be pretty entertaining, as Baer is discussing some valid points regarding the latest technology. Here, watch it too:

After watching the video I noticed some things. Before uploading it to YouTube, Jay was streaming the video live from a hotel room in San Diego and mentioned early on that he’s using Periscope, which just released on that day, to do it. Despite it being just out, he called it “super powerful, addicting, amazing and a game changer”. Toward the end of the video, he drops the name of Periscope again twice.

You probably see where I’m headed with this but you may be only partially right. Yes, I do think Jay endorsed the platform, being an online influencer he is (more on this to come) but that’s not even my main point.

What happened was I grabbed my phone and typed Periscope in the app store to learn more about the particular one of the two similar services. Did I buy the app? No. So did Jay fail in creating sales? I wouldn’t say so, and not only because he probably wasn’t trying to make one anyway.

In his article, Baer talks about getting clients from liking to loving your brand, making them passionate about your product. This way they’re not only more likely to take action by buying from you, but also to become brand advocates

While this is essentially true, I still don’t quite see how brand advocates’ recommendations are that much better from well-targeted online influencers’. Especially considering the points I made earlier about professional presentation and having a large and dedicated audience.

Don’t get me wrong, it’s great to have brand advocates but at the end of day, the decision to make the purchase is totally up to me anyway. Who do I get the information (who makes me aware) from is not that important. I assess the facts that I’ve been presented with and decide whether I need the product or not.

This is why I didn’t buy the app – I don’t need it. I don’t think there’s a set amount of praise I can hear before I’ll no longer be able to resist buying a product. Whether the pitch is made by online influencers or brand advocates doesn’t matter. I need complete information to make my own decision, and in many cases it’s the online influencers, who’ll deliver that. The key is to choose them wisely

Again, I’m not saying Jay is wrong, absolutely. It’s just that I feel like the power of online influencers might be a little underrepresented in his article. Would I rush to buy anything just because someone else bought it and was satisfied with the quality? Heck no!

I’m trying to make a purchase based on solid information. Whether it comes from incentivised online influencers or genuinely happy Average Joes is of secondary nature. Why should I trust the opinion of some stranger more than a person who’s been in a particular market for some time and that I have a number of points of common interests with?

In the context of Periscope-gate Jay is definitely an online influencer. If you’ll try to place him on either side of the infographic I linked to earlier, he’ll be on the left side more often than on the right (if not in all cases). Is that bad? Of course not!

In fact, he’s delivered exactly what I need before making a purchase decision – a cool piece of content, containing useful information conveyed in a captivating manner. Would I be more willing to buy the app after reading enthusiastic opinions of strangers? I don’t think so. The final decision is always mine.

Online influencers and brand advocates are two different animals. The former, more powerful and action-spurring than Jay would admit, the latter, a kind of an ideal type of client that any business would love to have, won with top-notch service and high-quality products.

So who’s more convincing? I say don’t put all your eggs into one basket, as both, online influencers and brand advocates command power and have certain traits the other group doesn’t. Influencers have large, dedicated followings and are presenting the information on products in a coherent way. Advocates seem more genuine and trustworthy, however, they may reach smaller audience when praising a business and not have as strong a personality as online influencers.

I’d love to hear your take, so if there’s anything I’ve missed, let me know in the comments or tweet me @Chatwee